From The News & Record

A gripping story of greed and corruption

North Carolina folks know E.C. Hanes as Redge, and they know that he’s part of the Hanes family of textile fame and fortune. They probably know that he’s long been active in civic affairs, especially those having to do with the arts and the environment.

If they didn’t also know him as a fine writer after he published his first novel, “Billy Bowater,” a few years ago, his second venture into fiction, “Justice by Another Name,” should set them straight.

Hanes’ new thriller is a gripping story of good people fighting a web of greed and corruption, a convincing saga that should please readers who enjoy the works of such authors as John Grisham.

North Carolina readers should be especially interested, because the setting is the eastern part of this state, and the corruption involves one of the state’s largest industries —giant hog farms, which can be great for the economy but pose serious threats to its environment.

The book opens vividly, with two adventurous boys playing along a familiar creek that’s been transformed excitingly by a heavy rain. Without warning, the containment wall holding a nearby hog-waste lagoon gives way, and the boys are swept up into a raging, unbelievably vile torrent.

One of them, Paulie Reavis, is killed. Making matters even worse, it’s been only a year since Paulie’s father, Paul, died while working with heavy equipment at a farm associated with the same giant hog farming operation.

Paul’s death was considered an accident, but questions linger in the minds of those who knew him, especially his wife, Lana, and his best friend, Will Moser, the chief deputy and heir apparent in the Hogg County sheriff’s department.

The time is maybe early 1980s. Hog farming has become big business, with fortunes to be made or lost. N.C. State has its new veterinary school. Memories of his service in Vietnam are still vivid in Will’s mind.

Somebody who seems a lot like Jesse Helms is one of North Carolina’s U.S. senators.

When Will starts asking questions about that day a year ago when Paul Reavis died, he stirs up more trouble than he anticipated. Powerful people in the county — especially Oris Martin of Martin Farms — are not happy. Amid suspicious attacks and even deaths, Will becomes more determined than ever to uncover the truth.

E.C. Hanes discussing Justice By Another Name with Frank Stasio on the State of Things March 14, 2017

When E.C. “Redge” Hanes was looking for a backdrop for his latest novel, he decided to draw from his own experience. He once raised hogs on a farm with his brother, and he also participated in an environmental study commission looking into the impact of hog farming on North Carolina’s ecology.

Host Frank Stasio speaks with Hanes about the book and how his background in lobbying fueled his interest in power and what people do to hold onto it.

E.C. Hanes was interviewed, October 4, 2014  by Frank Stasio discussing Billy Bowater and the State of North Carolina at a Crossroads of Arts and Politics.

William Walpole Bowater III, the title character of the debut novel by author E.C. Hanes, is the heir apparent to a powerful eastern North Carolina family. Everyone assumes Billy will take over his father’s law firm as well as his position as political power broker. But Billy Bowater needs to create his own legacy. When Billy finds himself working as the Administrative Assistant for Wiley Hoots, the senior senator from North Carolina, his life takes a different turn. As the Senator’s re-election campaign heats up, Billy finds himself at the center of an ethical dilemma after a controversial art exhibit enrages the Senator and a Christian television ministry and opens up debate about the use of public funds to sponsor art. As Billy gets more involved in backroom schemes, he begins to wonder if he has lost his moral compass. Ultimately, Billy must decide if he has sacrificed his values for the limelight he craves or if the intrigue of borrowed power is just too much for him to overcome. The horrific finale of the book creates the final episode from which Billy must judge himself relative to the standards that he was raised to meet. Billy Bowater is a fictionalized version of events that happened to author E. C. Hanes. Hanes, a long-time supporter of the arts, represented the American Arts Alliance on behalf of the National Endowment of the Arts when then-Senator Jesse Helms lead the charge against public funding for the endowment after a controversial art exhibit. That encounter helped open Hanes’ eyes to the slippery world of Washington power politics. “I wanted to write a book that would put into perspective the tendency in politics to use whatever might upset an anxious public in order to win at any cost,” says Hanes.“Hopefully after reading this book, the reader will better understand their responsibility as an informed citizen to ferret out the truly important issues they are being asked to decide from the emotional straw-men created by desperate politicians trying to hold on to power.” The following themes are interwoven throughout this fascinating look inside American politics: 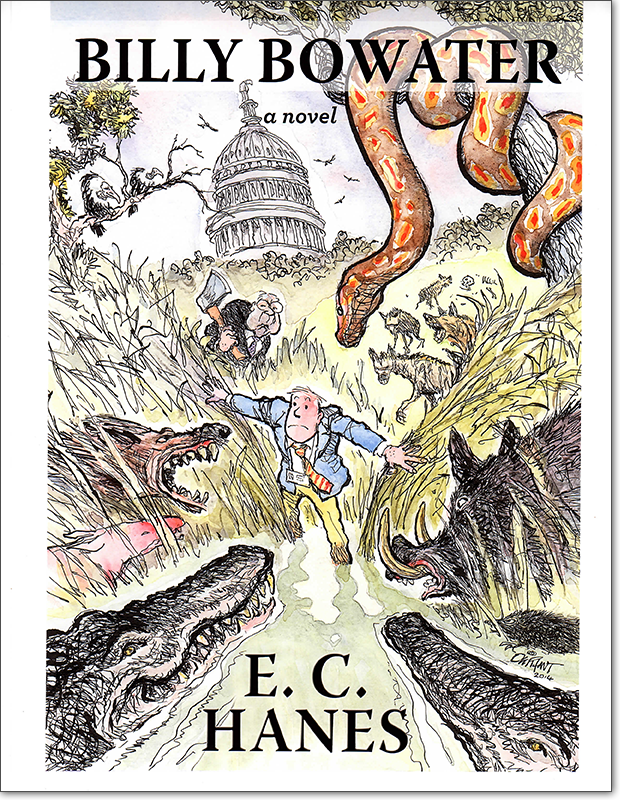